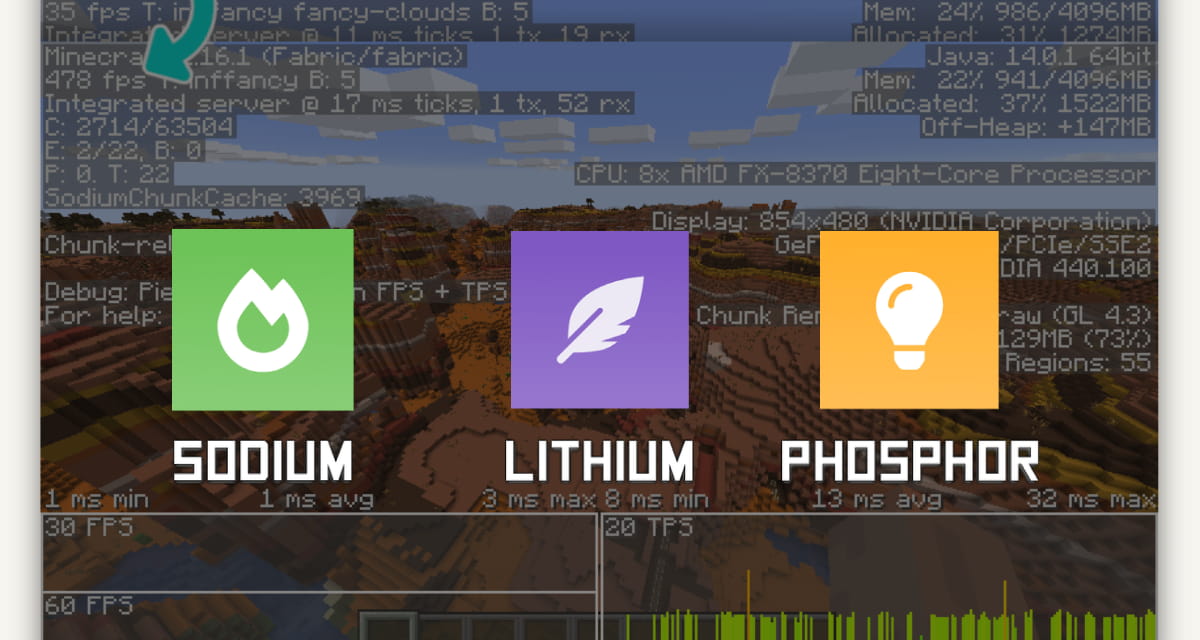 Sodium, Lithium and Phosphor are three mods working with the Fabric API with the ultimate goal of optimizing Minecraft better than OptiFine.

Any gamer who doesn’t run Minecraft on a gamer’s PC knows that optimizing Minecraft is not an easy task. If you’ve already tried mods like OptiFine, Better FPS or FPS Reducer without success, then Phosphor, Sodium and Lithium might be for you.

These three mods, created by jellysquid, each target a specific Minecraft optimization and require the use of the Fabric API. They work best together, but if you’ve managed to determine a specific area for improvement you may decide to install only two or even one.

Sodium replaces the Minecraft renderer and dramatically improves frame-rate, reduces micro-stutter, and fixes graphical issues. It offers great compatibility with the Fabric mods ecosystem and does not compromise on the look of the game

Sodium and Optifine are incompatible with each other. You have to choose one.

Lithium is a more general-purpose optimization mod for Minecraft that allows you to improve a number of systems (game physics, creature AI, block ticking, etc) without changing behavior.

It works on both client and server, and can be installed on servers without requiring that clients also have the mod. Once the mod is installed, you can see an average 45% improvement in server execution times, which translates into a much lighter game.

Even in single-player mode, your game runs an “embedded server” that controls the world your player is in. By optimizing the game’s server angle, you can free up your computer’s CPU to focus on other tasks, improving frame rate and responsiveness. For multiplayer servers, administrators can expect a dramatic improvement in tick times, allowing their hardware to support more entities, chunks and loaded players.

Phosphor is a mod that aims to optimize one of the most inefficient areas of the game : the lighting engine. It works on both the client and the server, and can be installed on the servers without requiring that the clients also have the mod.

With Phosphor, the time it takes the game to generate chunks can be cut in half for certain dimensions, and frame lag when traversing the world can be dramatically reduced. This is a no-compromise solution for improving performance, whether in single player mode or on large multiplayer servers, and does not change any of the features or behaviors of the original game.

✅ Source of the mods on Curseforge : Phosphor – Lithium – Sodium