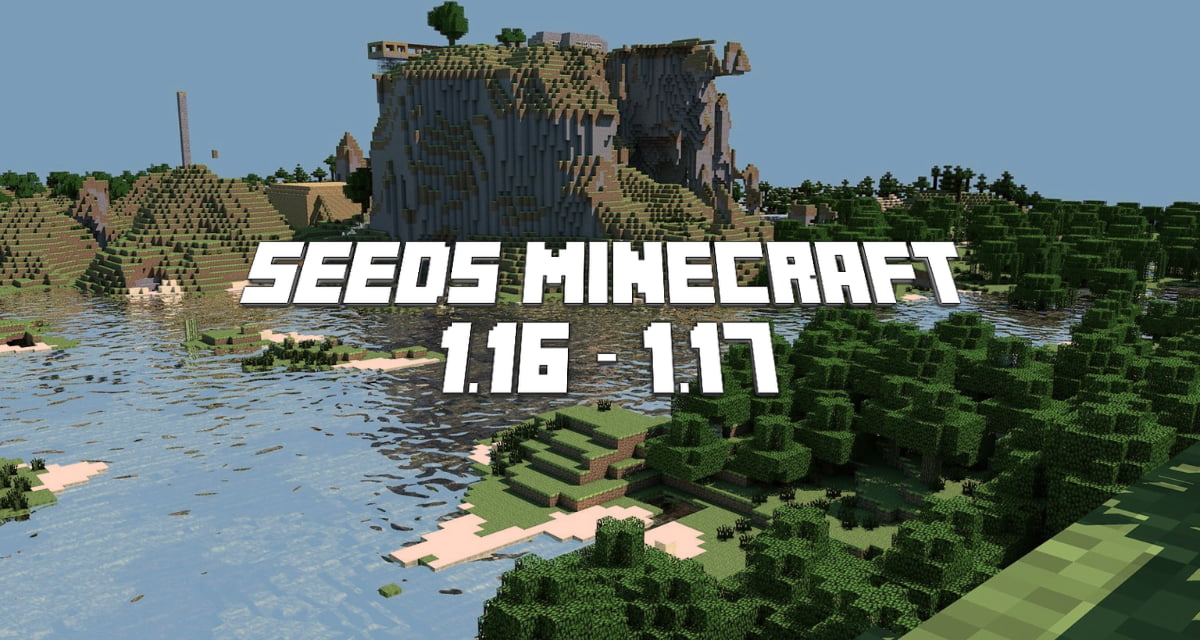 The update of the Nether having brought a lot of content in this dimension, we indicate you for the first seeds the location of points of interest if you borrow a portal of the Nether near your spawn point.

These seeds will only work on Minecraft Java Edition.

This is perhaps one of the most unique seeds on this list. The main attraction is the point of appearance, you start on a huge island of mushrooms in the form of a long bank. This is a rare biome, whose appeal lies in the fact that monsters will not appear there. There is also a ruined portal on this island that will allow you to collect loot easily. So it’s a very safe place to build your base. From here you will find a cold ocean with beautiful icebergs, a mountain biome and another ruined portal. There is also a wreck stuck in an iceberg that looks awesome. If you go even further, you’ll find a desert biome with a pyramid, as well as a very large desert village that spans a few mountains! There is even snow here, as it has mixed with the mountain biome.

The Nether is pretty interesting if you head to the portal near your appearance point. You will find all the biomes you want within a reasonable distance from each other. You can also find a remnant fortress and bastion nearby if you want to explore them!

Many biomes from the spawn point

If you want a variety of biomes nearby, then this is the seed for Minecraft for you ! There’s a swamp, a dark forest, a mesa, and a desert biome right near the point of appearance. The mesa is absolutely huge, and it contains at least three spider generators outside! You’ll also find numerous storage wagons on tracks all around the area. You may even see some villagers not too far from the apparition point.

In this seed, you appear directly in a rather large jungle biome. On top of that, you will find a temple nearby. There are a few varied biomes not too far away, and you will find a few villages, as well as a birch forest with a ravine to exploit. If you create a Nether portal near the point of appearance, you will find a lot of interesting things. There is a valley of sand souls, two fortresses, a basalt delta, a birch forest and a bastion remnant !

A pretty cool spawn point that allows you to have the savannah and a raider outpost right next to you from the start. You are also next to a very large desert that has multiple pyramids and a fairly large village. Not too far from here, you’ll find a ruined portal, as well as a savannah village. There are a bunch of villages to explore, and if you head to the water near the point of appearance, you’ll find a frozen ocean with lots of icebergs.

Two villages between the desert and the prairie

Start between desert and prairie, with a seaside village, a desert village, and even a nearby raider outpost.

Village by the ocean

Appears on the coast with this idyllic Minecraft seed, which allows super-fast access to trees, a village, and the endless blue ocean.

Village lost in the forest

A village lost in the forest right next to the point of appearance gives even more character to this already very original seed.

Village in the savanna

This friendly seed makes you appear a few blocks from a village, on the outskirts of a sprawling, hilly savannah biome.

An ideal seed for rushing the Nether

A fantastic seed for a Nether rush. Two villages in sight of the point of appearance, plenty of trees, and lava on the surface to boot.

A stark, dramatic, majestic world of snow-covered hills and rivers plowing through the mountains, this is truly a magnificent point of appearance.

Sunflower fields by the river

A beautiful biome of sunflower plains on the edge of a river, this is a fantastic place to start building a new home.

Lava fall in hills with peaks

At first glance, this desert biome doesn’t seem out of the ordinary. But then you’ll see the spectacular Extreme Hills biome in the distance, with its seaside lava falls.

This phenomenal Extreme Hills biome is the perfect setting for a castle or palace near the sky.

Jungle, plains and snowy hills all converge around a beautiful bamboo jungle within reach of the spawn point.

Another great appearance point in a bamboo jungle, but this time with a little surprise: can you save the entire jungle from burning before it’s too late?

A lost island near an underwater monument

This demanding island seed has more than a few surprises in store, including a nearby sea monument and a mushroom biome not far from the point of appearance.

While not the most difficult island seed to find, this group of tiny islands makes an interesting start and a great location for construction.

An island without trees

Do you dare to challenge this herd of cows to dominate this isolated and treeless island ?

An island covered with trees

A heavily forested island on the edge of a warm ocean, with coral reefs, shipwrecks and underwater monuments nearby.

This seed for Minecraft is a real challenge, it drops you in the middle of a gigantic desert. Can you save yourself from starvation ?