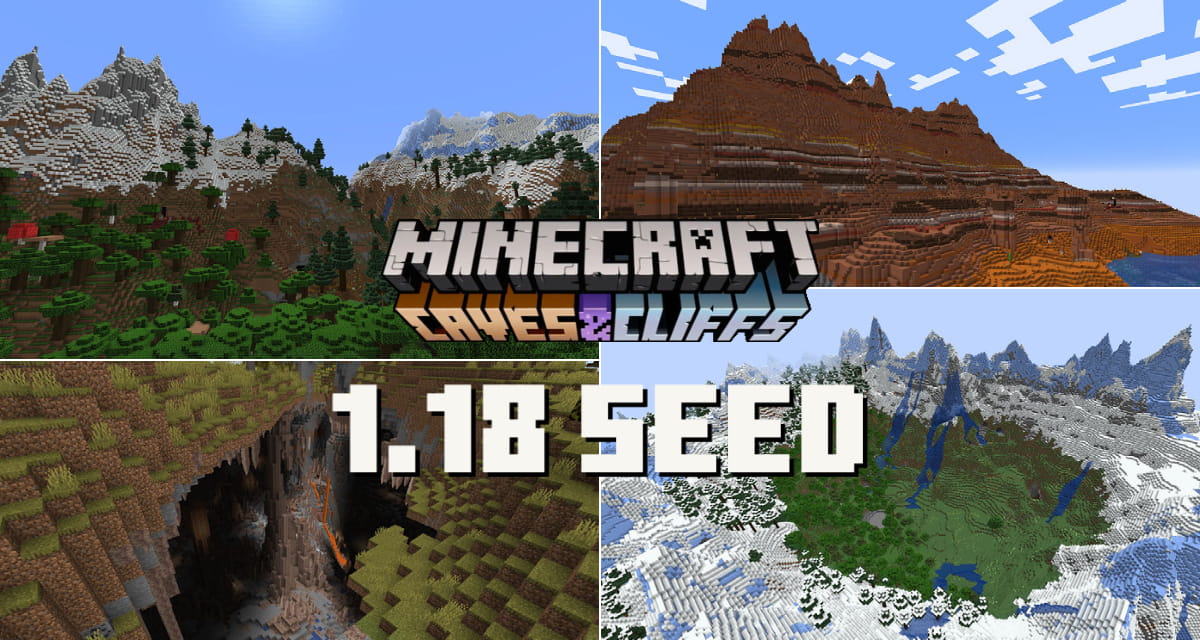 There is now a near parity between the Java and Bedrock versions of Minecraft, so the seeds we present you work indistinctly on Minecraft Java PC and Minecraft Bedrock Edition (Xbox One, Xbox Series X, Pocket Edition (MCPE), Windows 10, Windows 11, Nintendo Switch, PS4 & PS5). Only the structures can appear at different locations.

It’s not always easy to find a Badlands biome in Minecraft, so this rather unique seed makes you appear in a truly extraordinary biome. The best part is that you can take advantage of the terrain generation in Minecraft update 1.18, which gives us gorgeous badlands mountains and hills.

A huge mountain range by the sea

The next seed in our list highlights the capabilities of the latest 1.18 update. You appear in a huge mountainous biome with a wide variety of terrain. There are lush caves, ravines, underwater caves, and more in this area. We recommend that you go to the small island off shore near your point of appearance (coordinates: X: -27, Y: 66, Z: -807) to get a perfect view. From there, you will witness the huge mountain as well as several natural cave openings. There is also a shipwreck nearby.

The Himalayas in a Minecraft 1.18 seed

If you like mountains this seed is certainly for you. It gives you a realistic mountain generation with snow on top and forest and plains below. You will also find other smaller hills and mountains around a giant peak overlooking everything.

The mountain range discussed does not appear at the point of appearance, you will have to go to coordinates X: -621, Y: 125, Z: -1538 to find it. There is a ruined portal at the foot of the mountain. But if you don’t want to go that far, you can see the next best thing, the new grove biome near your apparition point. It’s a small mountain sub-biome that features snow blocks and snow-based creatures.

Speleothem caves are an addition in update 1.17, so get ready to experience them like you’ve never seen them before with the 1.18 generation. These are realistic versions of caves that are filled with pointed dripstone and similar structures. The pointed speleothems are supposed to replicate the stalactites and stalagmites of real caves. But if you haven’t discovered them yet, don’t worry. This Minecraft 1.18 seed is for that.

The next seed on our list is simpler. You appear a few blocks from a Jungle Temple (coordinates: X: -168, Y: 80, Z: 16) which you can loot immediately. You may not see it immediately because of the trees blocking it, but it is close to the point of appearance. Not to mention that even its entrance is blocked by blocks, so you’ll have to work a bit to reach it. But that’s not the best part of this seed.

On the opposite corner of the temple is the largest mushroom island (coordinates: X: 415, Y: 90, Z: 86) yet to be found in Minecraft Update 1.18. Thanks to a new cave system, there are plenty of resources and caves below to loot. Note that in addition no hostile creatures will appear in the caves since we are still in the Mushroom Fields biome. This is the only biome in the game where hostile creatures can’t appear, even at night. There are even several rivers flowing through these caves, which can lead you to the diamond level if you follow them closely.

Incredible crater on top of a mountain

This seed makes you appear a short distance from a mountain range. Players who travel to the top of this mountain range (coordinates: X: -419, Y: 96, Z: -687) will be able to find a valley with a biome of plains and birch forests. This valley is a fun and picturesque place where you can give free rein to your building skills.

This seed is exclusive to the Java version of Minecraft. Players who use this seed will find a very unique terrain. You start in a birch forest biome, in the valley of a vast mountain range. As you follow this mountain range north you will come across a mountain that towers above the others (coordinates: X: 1850, Y: 50, Z: -50).

This mountain easily reaches the maximum height of the world and is hollowed out by a biome of lush caves.

A lake in the middle of a crater, 3 villages and an pillager outpost

This Minecraft 1.18.1 seeds is working for the Java and Bedrock versions of Minecraft makes you appear at the foot of a large mountain. If you take the trouble to climb it you will come across a breathtaking view. A large lake nestled in the hollow of a crater. If you look around a bit, you should quickly find one of the 3 villages around and maybe even come across a raider outpost.

Here’s another amazing seed for Minecraft 1.18! Found by @gaspoweredpick on Twitter, it has lush caves directly at your spawn point, plus they are exposed on the side of a Badlands cliff. This seed also has a huge warm ocean, Mesa mine shaft near the spawn.

In case you want to start your Minecraft game by taking advantage of the brand new 1.18, this seed is perfect for you. You start directly at altitude, only a few blocks away from the screenshot you see above, the exact position being: X: 873, Y: 122, Z: -927. The landscape is breathtaking, you would think that a terraformer created it but no!

An ideal spot for a pirate base

Have you always dreamed of being a pirate in Minecraft? It’s possible in a natural way thanks to this seed. You’ll have to walk a bit to get there from the spawn point (the screenshot from the outside was taken at X: 3448, Y: 75, Z: 10625) but it’s really worth it.

The huge gaping hole in the mountain overlooking the ocean is the perfect place to make a discreet base. From this point you can choose to explore the sea or visit the mountains just behind.

An icy mountain on an island

This seed makes you appear on a perfect mountain island! There’s a great place to build near the top of the mountain, lots of different types of wood, flowers, space for farming, and even an igloo in the basement if you play on Bedrock Edition. Structures such as villages won’t be the same on Java Edition, but the terrain should be similar. Source: Minecraft & Chill Youtube video.

A huge cave with over 8 million blocks

Best seeds for Minecraft 1.18 in video

2 thoughts on “The best seeds for Minecraft 1.18 (Java and Bedrock)”