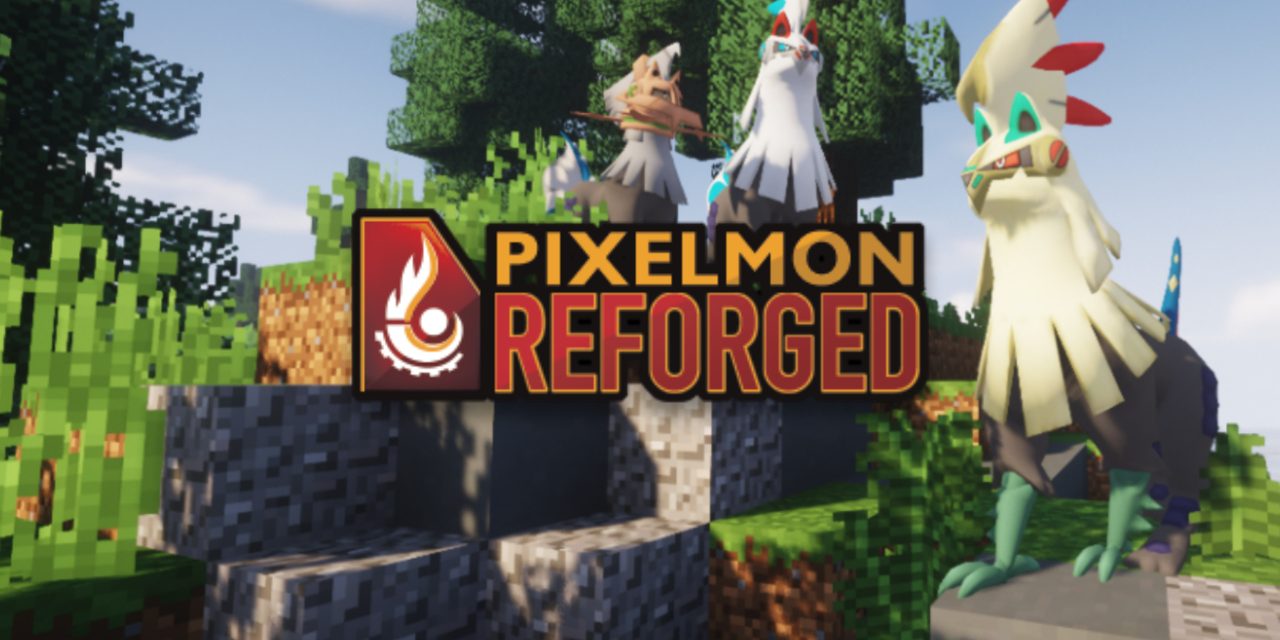 The Pixelmon Reforged mod for Minecraft is a mod that has evolved tremendously over time. First created in 2012 under the simple name of Pixelmon, it has made its way through the crowd of mods on the market. Unfortunately, The Pokemon Company had the mod removed, as they did not want their Pokemon license to be exploited without their consent. Despite a petition launched by players to try and get the company behind Pokémon to reverse their decision, nothing has moved.

In 2017, a team by the name of Blixel successfully took over the project under the name Pixelmon Reborn. Today, the mod has been renamed and is known as Pixelmon Reforged. Its developers continue to update it regularly via extensions (sidemods).

Here are the main features to remember about this mod :

Once Pixelmon is installed and launched, you will finally be able to see Pokémon in your Minecraft world. To start, a dialog box appears inviting you to choose your starter ! In Pixelmon, no strange looking teacher gives you your Pokémon. Once selected, your chosen Pokémon will appear in your own group tab on the left side of your screen. With the default controls, O allows you to change the size of the information in the bar on the left.

Now aim in one direction and press R and your Pokémon will be sent in front of you! The Pokémon you send does not have to be the one in the first slot on the tab. If you have more than one Pokémon, press the ↑ & ↓ buttons to move the Pokémon selector up or down, respectively.

Anyway, let’s move on now, to the battle ! Challenging a Pokémon or trainer to battle is simple : aim at the Pokémon and throw yours so that the Poké Ball hits the opponent. Sounds easy ? It won’t be so easy when you have to aim at a speeding Rattata !

Now that you’re in the middle of a battle, you’ll have the list of possible interactions at the bottom of your screen, which is similar to the one in the original Pokémon games. You will have the choice to fight, use an item from your bag, change Pokémon or run away. Choosing battle will give you the choice of moves to fight your opponent, and that’s it.

R : Send a Pokémon
↑ & ↓ or [ & ] : Move a selected Pokémon in the interface :
To mount a Pokémon, right-click on it
W, S, A and D : Speed up, slow down, left and right
I : Opens the Pokédex. If the player is looking at a Pokémon, the Pokédex will go directly to that Pokémon’s entry and will be recorded as “seen” if it has not been seen or caught before
P : Open the Pixelmon configuration GUI.
You can change the keys in “Options”, “Controls”.

To catch a Pokémon you will need balls.

First crack an anvil and a hammer :

Then create the top and bottom of your pokéball using Bay (found on bushes) for the top and iron for the bottom :

Now stand in front of an anvil with the result of your craft in your hand and right click on it, then take your hammer and hammer the anvil! Once you have your “Poké Ball Lid” and your “Iron Base”, you will be able to craft your pokéball as follows with a stone button :

Battle a wild Pokémon in an attempt to catch it. As in the original game, weakening it increases your chances of catching a Pokémon. You can also throw a pokeball outside of a battle, but you’ll need to aim at the Pokémon. If you miss your target, chances are the ball will break.

There are a lot of Pokéballs that can be crafted with different berries, you can check all the crafts on the official wiki

To view your Pokémon’s features, press “E” (the default) to open your inventory. Next to your character, you will see 6 slots displaying your Pokémon’s sprites.

After each battle you will be able to use the pokédex to see the information about the pokémons, here is how to make it :

To heal your Pokémon, you will need a healer or a bed. A bed can only be used at night, so a healer is preferable. They can be found in Pokémon centers that appear randomly in the world or are created using the following recipe :

You can also use a potion to heal your Pokémon, all recipes are on the wiki/potion.

Storing Pokémon with a PC

To store your Pokémon you will need a PC. You can find them in pokemon centers or you can make them yourself.

You will need aluminum plates, for this you will need to collect bauxite ore via the Drilling technique or by collecting it from a wild Pokémon.

Once you have your ingot, put it on the anvil and hammer it to obtain an Aluminium plate then use it to make the PC.

Evolve your pokémon with a stone

It is impossible to present all the items of the mod here, an official wiki already does that very well. Here you will find links to the most important pages :

You will need Minecraft Forge to run this mod.

📥 Download Pixelmon Reforged 8.0 & Download the recommended Forge version [1.12.2 – 14.23.5.2854]
You can find other versions of the mod for download on the official website or curseforge as well as a guide to install Pixelmon on a server. See also the Pixelmon modpack.

A very complete map taking advantage of all the features of Pixelmon to make you relive the original Pokémon adventure on Johto and Kanto :

Download Craftonia, a map created by the developers of Pixelmon Reforged exclusively for playing with their mod.

Questions and answers about Pixelmon

Pixelmon is a mod that takes all the gameplay from Pokémon games and includes it in Minecraft.

📱 How to install Pixelmon on Minecraft Windows 10, Console or Pocket (Bedrock) ?

Pixelmon does not exist for the Bedrock version of Minecraft. It is dependent on Forge.

⚙️ How to install Pixelmon on a server ?

🟠 How to make pokeball ?

You will need berries, iron, a button, an anvil and a hammer. Check out the full recipe on our site.

In the latest version it is no longer possible to crave a super candy. You will be able to find some in loot on the bosses or from a vendor.