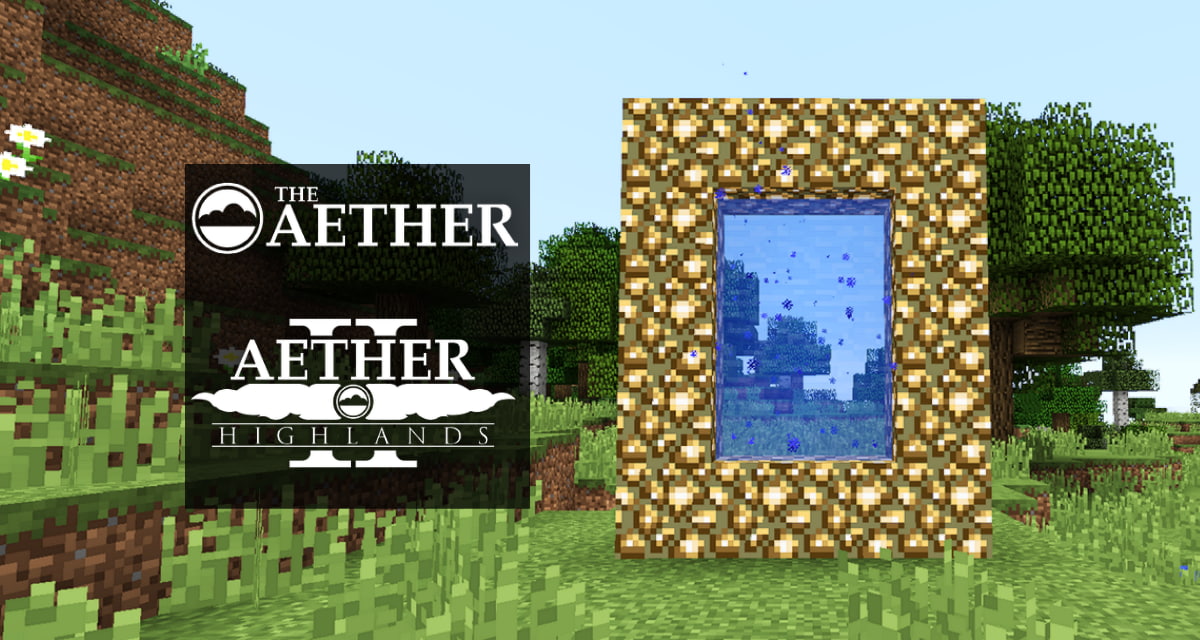 Aether is a mod for Minecraft adding a new dimension in the sky and clouds. Its main features are large floating islands and aero-cloud formations. The mod adds many new creatures, objects and blocks.

What is the Aether mod ?

In the Aether, normal tools have an extremely low efficiency, to mine blocks of aether, you will have to start by using your hands to harvest skyroot logs, this will be even faster than using diamond tools. Normal torches and fire cannot be used in Aether, although water brought from the normal world works fine. You are therefore limited to using items and tools from the Aether.

When you fall from a flying island, in the classic Aether mod you do not fall into the void but leave the Aether and appear above your original portal in the normal world, in the Aether 2 mod you return to the Outpost. It is possible to avoid dying by falling from the Aether by using objects or creatures specific to this dimension that do not take damage from the fall. The Aether can be used to travel quickly through the overworld (like in the nether).

There are many “dungeons” (bronze, silver, gold) scattered throughout the Aether. Each of them contains bosses, special creatures and structures. Once the boss(es) are defeated, there is usually a special reward in a stone chest, which can only be opened with the key that each boss drops after defeating it.

The Aether II: Genesis of the Void is the sequel to The Aether, and takes place primarily in the Aether dimension. The mod is a complete overhaul of the original mod and includes a wide variety of interesting new features. Note that The Aether 2 and The Aether are two separate mods and are available for download on their own.

The Highlands Update is a major update for the Aether II mod. It focuses primarily on adding several new biomes and island terrain generation, but also includes other features such as NPC Angel villages, Moa genetics and more.

The Aether mod is very rich in content. This article is not intended to be exhaustive. To know all the content of the mod, go to the wiki of the mod Aether and look for what interests you in the tab “Contents”.

Aether is the main dimension of the Aether mod. Like all dimensions, the Aether can be generated infinitely. Aether portals in the normal world can be used to teleport into the Aether.

How to get into the Aether?

To go into the Aether you have to create an Aether portal, depending on the version of the mod you are playing with there are 2 ways to craft it.

If you play with the mod Aether 2, you will have to build an Aether Portal with stone and iron ligots. Once the portal is created, put it on the ground and right click on it to enter the Aether :

If you play with the classic Aether mod, you have to build the Aether portal with light stone and put water in the middle with a water bucket :

Aether’s blocks have many properties. Some blocks, like Quicksoil glass, are transparent. Other blocks emit light, like the Ambrosium Torches. They follow the same rules as Minecraft blocks: they are almost all one meter high, ignore gravity and have 16×16 textures. Some blocks have unique properties like the Candy Cane blocks, which slow the player down when exposed to rain, or have reverse gravity like the Gravitite ore.

Some objects in the Aether come with a block or entity version of themselves that can be placed in the world. Unlike blocks that use block identifiers, objects use object identifiers.

The item categories, based on the Aether’s Creative menu, are Materials, Food, Consumables, Tools, Weapons, Armor, and Miscellaneous items.

Aether mobs appear in different ways, depending on light level and other criteria. Many types of creatures often appear in groups of the same species. Creatures cannot appear on non-opaque blocks, in water (except for aquatic creatures), in lava, or on half-blocks like slabs.

Creatures can also appear via eggs in Creative mode or via the /summon command.

Mobs behave in a similar way to players in general, as they are subject to the laws of physics and can be hurt by many sources of damage that would hurt a player. Some creatures, however, are immune to damage and/or effects.

Biomes are a feature of Aether II. Each biome has its own fauna and flora, and often its own climate and ecosystem. You will find: the Higlands (main biome in which you appear)

Illustrations of the Aether mod

There are two versions of the mod, we recommend you to play on the version Aether 2 because it is much more complete and more blocks and mobs.

Remember to download the correct version of Minecraft Forge and watch our tutorial to install a mod.

Does the Aether exist in Minecraft?

No, the Aether is a dimension added by the Aether mod. It does not exist in the Vanilla version of Minecraft without the mod.

Why is the Aether not in Minecraft?

The creator of the Aether has confirmed that it will not be added to Minecraft Vanilla because Mojang strives to add unique content to the game, rather than things that already exist.

How to get out of the Aether in Minecraft?

You can exit the Aether via the Aether Portal. However, there is also another way out: by jumping from flying islands into the void. Instead of falling into the void and dying like in the End, you will arrive in the normal world.

How to access the Aether in Minecraft without mods?

It’s simply impossible to get into the Aether without using mods.