The Allay looks like a little blue fairy with bat wings. If you give it an item, it will pick up items of the same type abandoned nearby.

The Allay is the creature that won the Minecraft Live 2021 mob vote, over the Copper Golem and the Glare. It’s a mob that will be friendly to players and likes to dance to the sound of music blocks, it looks a bit like a baby Vex but much nicer. When he is given an item, he will search nearby to see if he can find similar items and then bring them back to the player. The Allay will always place the item it is carrying next to a music block if there is one nearby.

Note that the Allay will not duplicate the item he or she is carrying and will not search chests for it – he or she will only pick it up if it is on the ground.

What does allay in Minecraft do ?

Allays fly around aimlessly until they find an object. It will appear to hold that object in its hand, then scan the area around the player for instances of that same object, where it will then return it to the player. If it interacts with an empty inventory slot again, the player will get the item back. The Allay can pick up items that are 15 blocks away from them.

They have one slot in their inventory, allowing them to carry 64 stackable items at a time. If a block of music is playing, the allay will send items back to that particular block for up to 30 seconds with a vibrating particle that reaches the allay.

If the allay has items in its inventory and is killed, it will drop any items it had.

How do you get the Allay in Minecraft ? 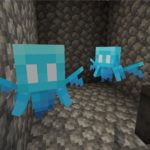 Allays can be found around looter outposts, locked in dark oak cages. From 1 to 3 allays can appear in each cage.

You can also find allays in the prison cells of the mansions. From 1 to 3 allays can appear in each cell.

When will the Allay be added to Minecraft ?

The Allay will be added to Minecraft in the 1.19 update, also known as The Wild Update. Minecraft 1.19 will be the next major update after Caves and Cliffs part 2, and is expected to arrive in 2022. The Wild Update will also bring the Warden and the Deep Dark biome, which were delayed in 1.18, as well as frogs and mangrove.

The Allay can be previewed in the Bedrock Beta Bedrock Edition 1.18.30.22