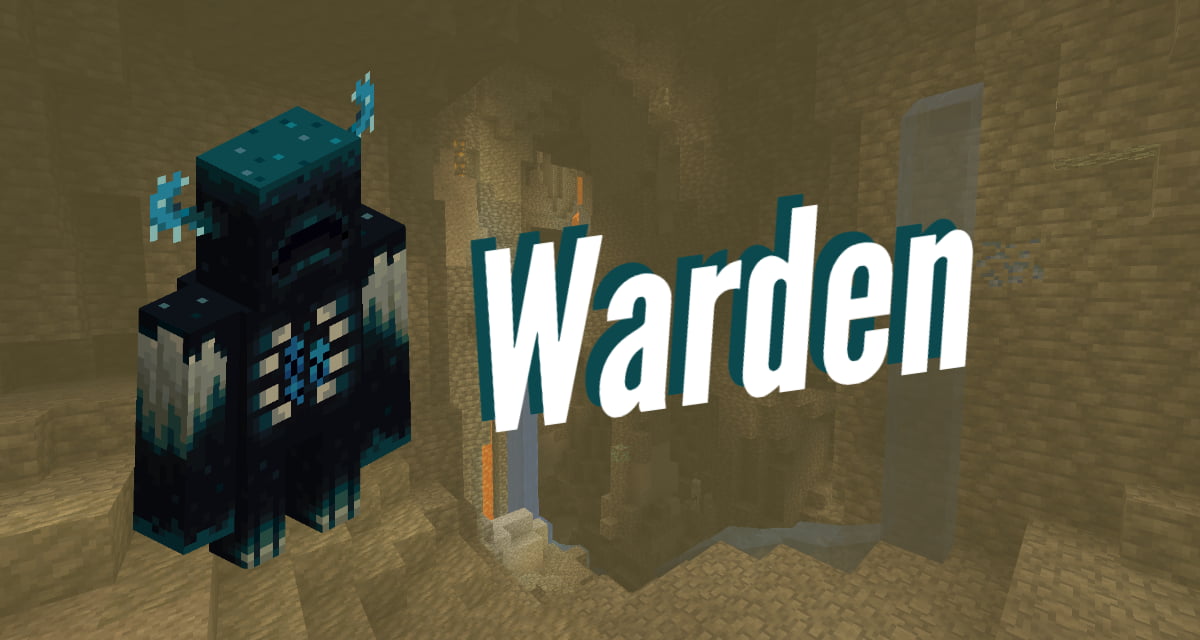 The Warden is the first blind Minecraft creature to be added to Minecraft. Instead of following the player normally, it uses the sculk sensors on its head to detect vibrations.

It was shown in the Warden reveal that it will be attracted to projectiles that produce a sound. However, it is not recommended to fight the Warden, as it does a lot of damage. Mojang developers have also stated that this creature is not meant to be fought, but rather to scare players.

The Warden is a hostile creature coming in Minecraft 1.19 – Wild Update.

Wardens are blind and wander around randomly. If the Warden hears a vibration or a sound nearby then it will be alerted and go to the place where the vibration comes from. He can also sense the area around him, allowing him to pinpoint the location of an entity. The more vibrations a creature or player emits, the more agitated he becomes.

The souls on its chest create a faint heartbeat, in rhythm with the Darkness effect. The animation and sound gradually accelerate as the warden becomes more agitated. Wardens prefer to track down the creatures they find most suspicious, rather than the closest one.

When a Warden reaches a sufficient level of agitation, he roars and pursues his target. It normally moves towards its target, regardless of the vibrations emitted. If a creature or player collides with a warden, or attacks it first, the warden immediately becomes angry.

The warden tracks and attacks all other creatures, except for other wardens. It can also track vibrations emitted by entities that are not monsters, such as projectiles or wagons. After sixty seconds of “quiet” and no vibrations, the warden buries himself again.

The Warden is classified as undead, which means it takes extra damage from the Smite enchantment, is healed by the Instant Damage effect, takes damage from the Instant Healing effect, is immune to Poison and Regeneration, and is ignored by the Wither. However, unlike some undead creatures, the warden does not burn in direct sunlight.

The Warden is supposed to be a natural disaster that is almost impossible to kill and best avoided. He has abilities not yet implemented for players who try to gain an advantage by building pillars, walls or traps.

If the target is high up, hidden behind walls, or simply not in range, the Wardens will charge a wall-penetrating ranged attack to kill their target. The ranged attack comes from their rib cage, which opens to let the sonic beam escape, dealing 10 points of damage and bypassing shields and armor.

How to summon the Warden ?

Wardens do not use the traditional mechanics of creature appearances. To summon a warden, a sculk shrieker must be activated three times (making noise) and there must be no other warden nearby within 48 blocks. Then a warden will appear from the ground.

Up to 20 attempts are made to make a Warden appear in a 11×13×11 square centered on the shrieker. The light level must be 11 or lower for a Warden to appear. The Warden disappears by burying himself in the ground if he is not angry and if he has not detected any vibration for at least one minute.

Where to find the Warden in Minecraft ?

Warden are found underground, in deep, dark caves located “deep in the world” in the Deep Dark biome, where the sculk is located. The surrounding area is very dark, making it easier for the Warden to crouch.

Can you tame the Warden in Minecraft ?

No, it is not possible to tame the Warden.

Is the warden in Minecraft yet ?

Yes, the Warden is in Minecraft.

How much health does a Warden have Minecraft ?

Unpreserved designs of the Warden

Mojang revealed the Warden development process and shared some uncurated Warden concepts. Previously considered names for the Warden were the “stalker” and the “hollowed”.

The first iteration of the stalker was large, asymmetrical and had a glowing core. It was present in the totems of the Deep Darkness. The remained completely still to entice players to take its core and aggravate it, and could transform into a blocky tall form to prevent players from digging. This iteration, especially its appearance and transformation mechanism, was clumsy and more goofy than scary, so it was dropped.

The hollowed was designed with the intention of inciting trypophobia (phobia of holes) and had white skin with holes in it. This iteration was deemed too gory by the developers and had to be toned down.

In the sixth episode of “The Secrets of Minecraft,” it was jokingly revealed that the Warden’s personal name is William, in the same way that the Ender Dragon, the Wither, and the player characters all have personal names.