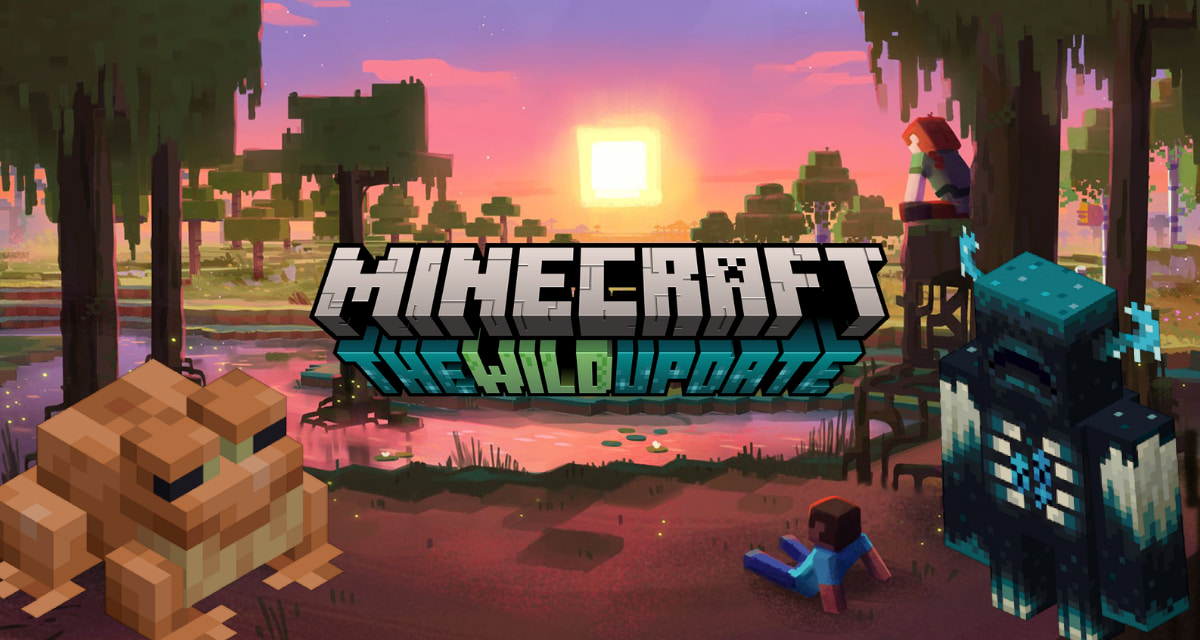 The Minecraft 1.19 update, the “Wild Update” is now available in your launcher. Discover all the new features it brings …

You can finally play the latest Minecraft 1.19 update, it is called “Wild Update” and was released on June 7, 2022. This update introduces new locations, materials and blocks such as the Deep Dark and Mangrove biome, Ancient City, creatures like the Warden (originally planned for Minecraft 1.18), the frog, the tadpole and the Allay, as well as new items that can only be obtained in these new biomes.

The Warden is a hostile creature summoned by sculk howlers in the Deep Dark biome within the cities of the Deep Dark. It can perform melee attacks as well as ranged attacks. Wardens are completely blind, relying on their sense of smell and hearing to identify moving entities. Wardens currently deal the highest non-explosive damage of any creature in Minecraft.

Find out everything there is to know about the Warden in our dedicated article.

Minecraft frogs will live in swamp biomes and will exist in several color variants depending on the heat of the biome: temperate, warm, and cold. The temperate variant is orange, the warm variant is white, and the cold variant is green. They can croak, jump, swim but walk slowly on land. They especially like to jump off lily pad and big dripleaf.

Frogs are born from tadpoles, which themselves come from frog eggs.

It is mainly because of the frogs that the fireflies will not be added to Minecraft, indeed they are toxic for the frogs.

Tadpoles in Minecraft turn into frogs 20 minutes after their birth, a process that can be accelerated with slime balls. The type of frog depends on the temperature of the biome in which the tadpole has grown. The tadpoles can be transported in a bucket of water.

On land the tadpoles look for the nearest body of water, if they don’t find one they die quickly, in the water they are chased by axolotls.

The Allay is the mob that won the Minecraft Live 2021 vote against the Glare and the Copper Golem. It can fetch blocks or dropped items for a player, collecting the same items it holds in its hand.

The Allay drops items (on loaded chunks) and can carry up to one stack at a time, but cannot duplicate items or take items from chests. He drops his collected items when within range of a music block. It is possible to make him hold an item by interacting with the allay.

Allays sometimes appear in cages in raider outposts (similar to the iron golem), and inside mansions.

The Deep Dark is a biome in the normal world that is generated deep in areas with low erosion. This biome is often covered with large patches of sculk blocks surrounded by sculk veins, which include sculk-related blocks such as sculk shrieker, sculk sensors, and sculk catalysts.

No creatures appear in this biome, but if a player triggers a sculk shrieker a certain number of times, the Warden may appear, giving the player the Darkness effect. This is the only biome where Ancient City can be generated. This biome is very dimly lit as there is no luminous lichen, the only sources of natural light being sculk catalysts and lava. Abandoned mineshafts cannot be generated in this biome, and they cannot cross paths if a mineshaft is generated in a nearby biome.

An Ancient City is a palatial structure found in Deep Dark biomes at Layer -52, housing chests containing items not found elsewhere or that can help you avoid the Warden, such as Echo Shards, Disc Fragments, and the Swift Sneak enchantment.

The mangrove swamp is a variation of the classic swamp biome that grows in warmer regions, usually next to jungles and deserts. The foliage of this biome is very dense, with many mangrove trees that vary greatly in height.

The soil of the mangrove swamp is mostly mud blocks with occasional patches of grass. The grass is the same color as the normal marsh, but the leaves and vines have a unique shade of light green and the water is teal rather than gray. Frogs are the only passive animals that appear in this biome and all frogs that appear here are hot frogs.

New blocks accompany the new biomes and have various uses.

Let’s start with all the blocks related to the Deep Dark biome and the Warden.

The sculk sensor is a block that detects vibrations caused by actions and events, and emits a redstone signal.

The addition of the mangrove swamp brings us new specific blocks:

Mangroves trees are a new type of tree variant found in mangrove swamp biomes. They have a unique shape, with a mangrove root system leading to a forked trunk and mangrove leaves. They are composed of mangrove logs and generated roots made of mangrove root blocks. You will sometimes find hanging propagules on the leaves of the tree. Mangroves have a chance to generate a honeycomb.

You will find mud blocks in the mangrove swamp biomes, but you can make your own, simply by adding water to soil. Mud has other uses as well: let it dry to make clay, or add wheat to the mix to make clay bricks.

The boat with chest is similar to a wagon with chest, but with a boat instead of a wagon, so the player can take a trip on water and carry items. It can contain only one entity and is made by combining a chest with any boat.

There are as many variants as there are wood planks that can be created, including dark oak, jungle and the new mangrove wood plank variant.

A new music disc 5 is introduced:

Froglight are obtained when small cubes of magma are eaten by frogs. They have three color variants: yellow (ochre) for the temperate variant, green (greenish) for the cold variant and purple (pearly) for the hot variant.

The variant depends on the type of frog that eats the magma cube. They emit a level of light equal to 15.

The echo shard can only be found in the chests of the Ancient City in the Deep Dark, they are used to make the recovery compass.

One of the 8 variants of goat horn falls when a goat punches a coal, copper, emerald, iron ore, log, ice block or stone:

Tadpole in a bucket

You can get a bucket with a tadpole by right clicking on a tadpole while holding a bucket of water in your hand.

The Swift Sneak enchantment is found exclusively in the chests of the Ancient City. It allows you to walk faster by crouching, up to 75% of normal speed at level III. Swift Sneak cannot be obtained by fishing, enchantment or other loot chests. It is an enchantment for leggings.

The Darkness effect is an effect in Minecraft triggered by the Sculk shrieker, causing the player’s camera to dim, thus limiting his or her vision of players. Reduces the gamma to an equivalent of “Moody” while having this effect.

Added 4 new music tracks composed by Lena Raine as Ancestry (plays in the Deep Dark biome), Aerie, Firebugs and Labyrinthine (plays in lush caves, all types of swamps, forests and jungles, as well as in the menu screen).

On consoles (for the Bedrock Edition) Xbox Series X, Xbox Series S, Xbox One, PlayStation 5, PlayStation 4, Nintendo Switch, iOS, Android, and Windows 10 launch the game and it should update itself to version 1.19.